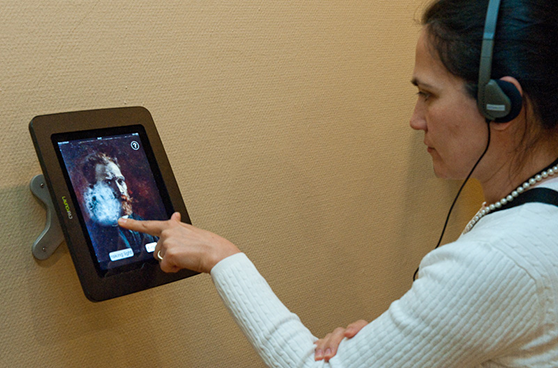 The Van Gogh Museum invited us to develop a more robust and reliable version of The Augmented Painting, Phase 1. Instead of building more robust and reliable hardware ourselves for phase 2 of our installation we decided to choose a device which already proved itself in everyday practice, the iPad made by Apple. This device is rugged enough to withstand everyday usage by museum visitors, and since the device is in general well known many visitors already know how to interact with it. This means the interaction model changed considerably; instead of using the digital spray-can visitors now directly touch the screen with their finger to reveal the special captures. This resulted in a less playful, but easier to operate and more stable installation.

Instead of using the painting ‘The Bedroom’ the Van Gogh Museum asked us to complement their exhibition ‘Van Gogh’s studio practice: Canvases re-used’, which was on exhibit from 21-06-2011 till 12-06-2012. This presentation examines the different ways Vincent van Gogh re-used his canvases. ‘Nude girl, seated’, ‘Self-portrait with pipe’, ‘View from Theo’s apartment’, ‘Trees’ and ‘Basket of pansies’ are the five painting which were highlighted during this exhibition. The Van Gogh Museum chose these five paintings because they all feature unique research results. One wall featured the real paintings together with printed text and images about the research, a connected wall had our iPads attached to it. 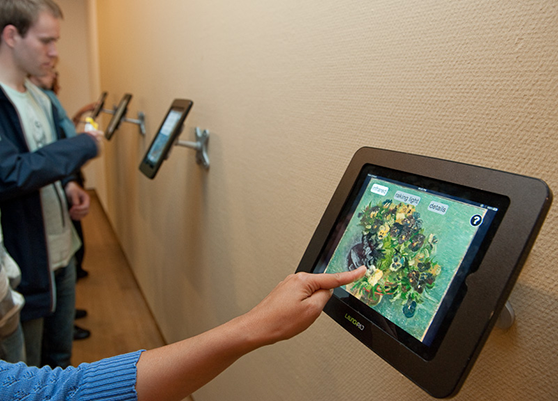 We used five iPads for our setup, one for each painting. This meant each iPad has slightly different options depending on the available captures of the painting. Besides showing x-ray and infrared captures we also added hotspots on the screen. When you touch these hotspots you zoom in on the painting, highlighting fine details which deserve special attention. Each layer has an ‘information’ button which offers the visitor extra information about the current capture, a ‘?’ button on the top right of the screen gives general information on the usage of the installation.